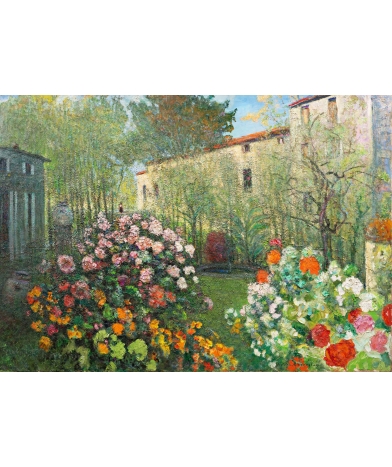 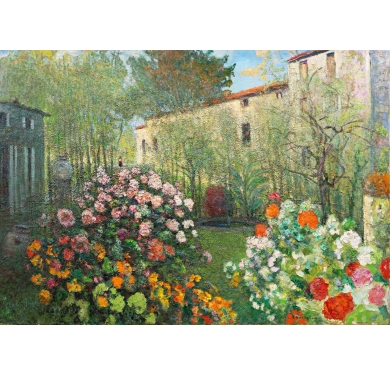 Oil on canvas, signed lower right and lower left, titled on back

Charreton is a self-taught and modernist painter. His art is unique, unclassifiable. He developed his own techniques and his own supports. In his landscapes, the color dominates the drawing which is quickly sketched with a pencil on the cardboard or the bare canvas. He paints on the ground, without preparation, and practices painting "in reserve", which lets the support appear from which he uses the color. The material, oil paint most often, is applied directly with a knife or brush, and the chromatic juxtapositions he makes are bold and daring.

The power of Charreton's works is comparable to the Fauvist works produced by Matisse or Derain at the time Victor Charreton moved to Paris. The Auvergne, Brittany and Provence were the subjects that would remain dear to him throughout his life.

"Awakening, Dawn in the Garden" is one of Charreton's greatest masterpieces.

On a huge format, it is visible that the artist devoted a particularly large amount of time to depicting his property at the height of flowering. He worked meticulously, in full pate, applying up to a centimeter thick of pictorial material to the canvas. In this painting, the painted work of Victor Charreton becomes sculptural. A true explosion of pure colors, this work is absolutely amazing when we look at it with close-up shots: The representation of the flowers becomes almost abstract, and shows us the immense talent of this pioneering artist.

In the foreground, two huge shrubs covered with flowers stand out: by mobilizing a rich palette of reds, oranges, yellows, pinks, greens and whites, the artist shows us a flowering of a rare exuberance. The two shrubs are separated by a narrow strip of grass that guides the composition towards the following planes: the grass of the garden, the trees and the buildings partly lit by the sun. We are thus invited to follow this strip of grass and to slip between the flowers to enter this enchanted place at a very special time: daybreak. Thus, the main house is illuminated by the still raking light of the sun coming from the upper left side. A gap in the blue sky where light clouds are floating accentuates the luminosity of the scene. The gracefulness of the composition, which combines two lines that meet: the line sketched by the strip of grass that rises towards the center of the painting where the line constituted by the first rays of sunlight that descend along a diagonal converges.