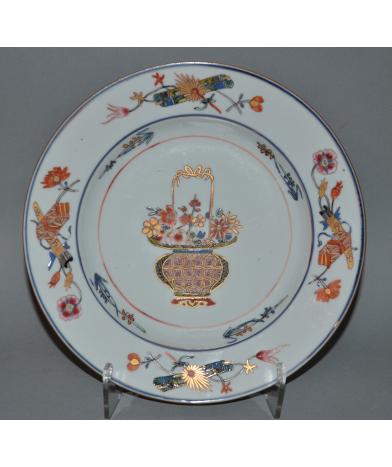 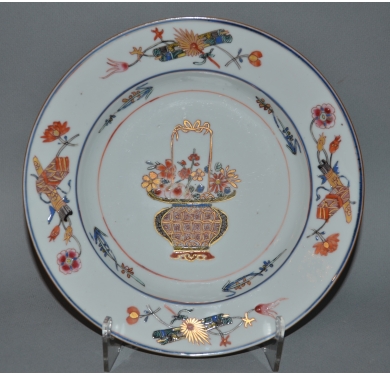 Ensemble of eight round plates

Ensemble of eight round plates in Chinese porcelain from the East India Company, decorated with a flower-laden basket and a border of scholary objects.

This ensemble of eight round plates belongs to the production known as "porcelain from the East India Company’s famille verte ", which was destined for importation to the European market.
Famille verte, or green family, pieces are characterised by décor in which green glazes are dominant, the by-products of copper oxide.
The greenish hues are accented by the discrete application of other colours, namely yellow, blue, purple, red and matte gold for splendid contrast. The greens of the Chinese ceramists are skillfully nuanced and are pre-eminent due to an abundant employment of vegetal motifs.
The designs are painted sur couverte, which is to say after the porcelain is fired once (at a temperature of 1400°C) with a preliminary coat of protective, transparent glaze. Decoration is then brushed on and fixed during a second firing at 800°C, for the copper which creates the green tones cannot withstand extremely high temperatures.
Successor to popular "blue and white" designs, the famille verte was massively developed and exported to eager European consumers by ceramists working under Emperor Kangxi (1662-1730).
The ornamentation of these pieces was highly appreciated for its perfect use of space, resulting in clever, vigorous compositions without superfluous elements.