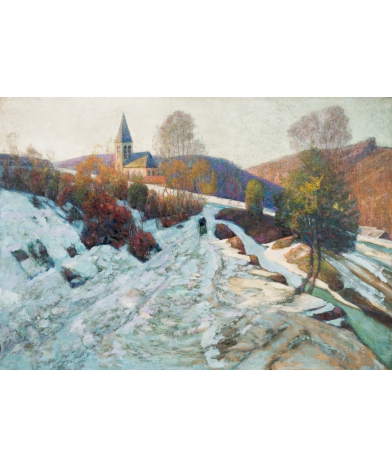 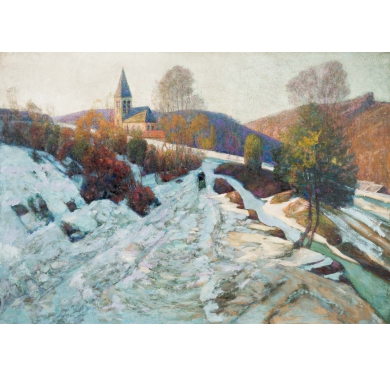 Charreton is a self-taught painter and modernist. His art is unique, unclassifiable. He developed his own techniques and his own supports. In his landscapes, the color dominates the drawing which is quickly sketched with a pencil on the cardboard or the bare canvas. He paints on the ground, without preparation, and practices painting "in reserve", which lets the support appear from which he uses the color. The material, oil paint most often, is applied directly with a knife or brush, and the chromatic juxtapositions he makes are bold and daring.

The power of Charreton's works is comparable to the Fauvist works produced by Matisse or Derain at the time Victor Charreton moved to Paris. The Auvergne, Brittany and Provence were the subjects that would remain dear to him throughout his life.

Masterpiece of Victor Charreton, this painting represents the subject and the emblematic season of the artist. This painting comes from the personal collection of Dr. Chatin, author of the catalogue raisonné. It is also the largest known format executed by this extraordinary painter.

The richness of the composition, which combines several planes, is remarkable: the path in the foreground, the church illuminated by the sun, which stands out in the second plane, and the hills in the background. The play of light and shadow is beautifully rendered. The palette, with its combination of whites, russets, mauves and purples, evokes a sunny winter day. It is obvious that for Charreton, this work was special: he used all his talent to work the material in successive layers. The crumpled aspect is opposed to the flatness of the snow. Here especially, Charreton is in absolute creation.