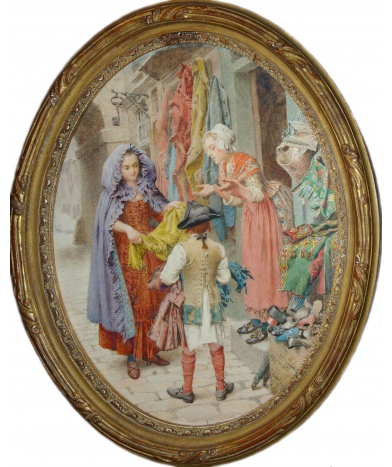 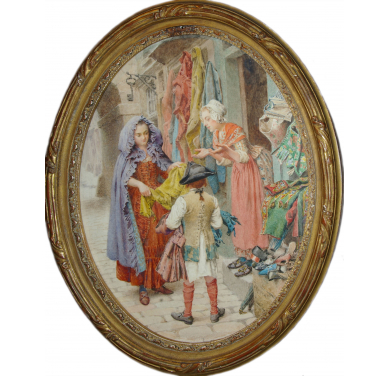 Maurice Leloir was born into a family of painters and illustrators. He was the student of his mother, Héloïse, née Collin (1920-1873), who was a designer for fashion engravers. Then he was a student of his brother, Louis (1843-1884), who won deuxième prix in the prix de Rome in 1861. Maurice modeled his career after his older brother’s.

When the war broke out in 1870, Maurice was not able to pursue his studies at the Ecole des Beaux-Arts. He turned instead to illustrating classical works, which would develop his liking for ancient costumes and especially costumes from the 18th century. This particular interest allowed him to become a master in this domain that was barely studied at the time. It was only studied by costume designers in theater, and historical painters. It is in this artistic atmosphere that the Leloir family developed into the artists they became. They were connected with Edouard Detaille, Gustave Jacquet, François Flameng, Robert de Cuvillon, and Jules Worms. All of these men were portraitists and specialists in history paintings, and they would all collect numerous antique costumes in their studios.

The career of Maurice Leloir gets confused with that of his brother’s up until Maurice’s death; which included all the work they did when it came to creating illustrations, and the activities they did for the Société des aquarellistes français. The society was founded in 1878, and both brothers were members. Their cousin and painter Édouard Toudouze, was also a member of the society and he was the creator of the tapestries at the parliament of Brittany in Rennes.

At that time, Maurice was considered an infallible master of historical scenes and due to his reputation was solicited by printers to create advertisements for department stores, spice shops, and hotels.

During the 1920’s, his signature can be found on images of the Bon Marché, labels and fans of La Bénédictine, on wine from Calvet, champagne from Clicquot, and Planteur chocolate. Also, he was commissioned to do some decorative ensembles for Antonin Bordes’ villa, Tijuca, in Saint-Jean Cap-Ferrat. In 1903, he did 18th century style scenes of the Trianon and Versailles for the villa Tijuca. In 1923, he did Louis XIV style scenes on the ceiling and friezes of the Marquise de Sévigné’s Boulevard de la Madeleine tea room. Finally, Leloir was invited to come to Hollywood by Douglas Fairbanks in 1928 to create costumes and décor for the film, The Iron Mask.

Starting in the 1880’s, he was known for his “archeological” meticulousness as a painter and costumer. Leloir also adhered to the wishes of the Union centrale des arts décoratifs and its exhibitions; as well as the contemporary creations of his local contemporary and historical museums. He also made sure not to forget the retrospective museums of the Expositions universelles.For the Exposition universelle of 1900, costumes and accessories were very important at that time and numerous collectors were solicited, however, Leloir was always the most sought after. 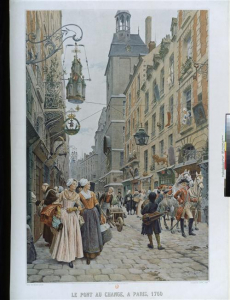