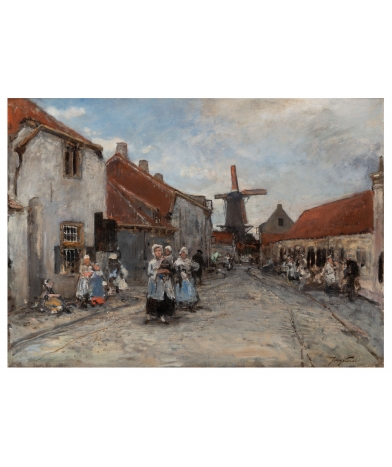 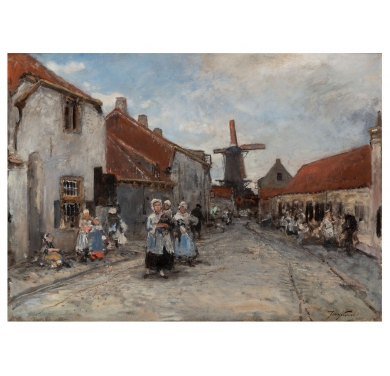 From the Posadas Collection in Buenos Aires

Johan Barthold JONGKIND was a Dutch painter who lived and worked mainly in France. Among the precursors of Impressionism, he is clearly the most recognized as such.  Edouard Manet, himself a precursor of this artistic movement, called Jongkind "the father of modern landscape". Claude Monet was guided by his boldness and his depictions of nature, which heralded Impressionism as early as 1860, 13 years before the first salons that were to revolutionise the fine arts.

Born in 1819, Johan Barthold Jongkind studied drawing in The Hague, where he became a friend of Eugène Isabey and followed him to Paris in 1846. Together they discovered Normandy, from Honfleur to Fécamp, from Yport to Saint-Valéry-en-Caux. Back in Paris, Jongkind sent to the Salon a View of the port of Harfleur, acquired by the State (Musée de Picardie, Amiens). From 1862 to 1865, Jongkind went to Normandy many times and got close to the greatest painters and poets of the time; from Corot to Sisley, from Courbet to Baudelaire, from Boudin to Claude Monet, Jongkind quickly became a major painter. If the Normandy landscapes are the most numerous in Jongkind's work, the artist also leaves us views of his native country where the characters are treated with strength and character.

Our painting is an important work whose preparatory work "Street in a Dutch Village", a watercolour of the same subject measuring 16 cm by 20 cm, is in the Louvre Museum.  This watercolour is reproduced in Victorine Hefting's book, page 118, under the number 200.

Our painting left France for Argentina at the beginning of the 20th century, and was exhibited by the Witcom Gallery in 1939 in Buenos Aires. The painting is reproduced in the catalogue of the exhibition "Exposicion de Arte Frances, escuela 1830 y moderna" from May 22 to June 10, 1939, organized by Luis D. Alvarez.

In this work, Jongkind has used a skilful play of transparencies to paint the cloudy and moving sky, and has energetically brushed the figures in full pate to give them more power.  The composition is very classical, with vanishing lines converging on the mill. The depth created here is reinforced by the railway tracks.

Hundreds of Jongkind's works are exhibited all over the world, in the most important museums: