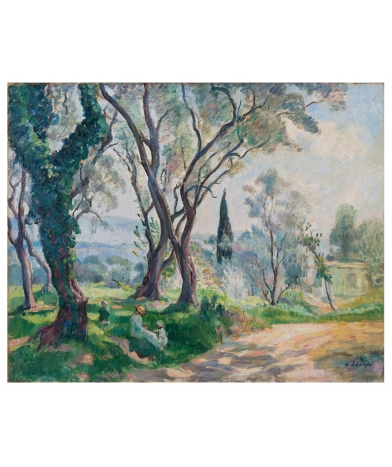 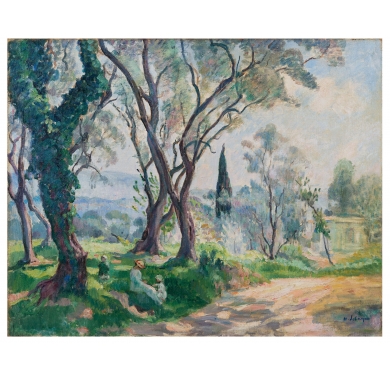 Henri Lebasque was born on 25 September 1865 in Champigné (Maine-et-Loire). He was first a pupil at the School of Fine Arts in Angers. He came to Paris in 1886 and for a short time was a pupil of Bonnat, then of Humbert, whom he helped decorate the Pantheon. But it is certain that his attendance at the old Pissarro, on the outskirts of Paris, had more influence on him than Bonnat's lessons.

In 1893 he met Luce and Signac at the Salon des Indépendants in Paris and adopted pointillism for a few years. Living in Lagny in the 1900s, married and father of a family, he painted, from 1900 to 1906, the nearby woods of the Marne. It was with his discovery of the South of France that the most complete transformation of his painting took place. He then continued to stay in other regions: Vendée, Brittany, Normandy. After Saint-Tropez and Sainte-Maxime, he finally settled permanently in Le Cannet in 1924.

Friend and neighbour of Bonnard, he came closer to it by the similarity of themes. He worked on the decorations of the Théâtre des Champs-Élysées and those of the transatlantic liner Paris. He died in August 1937 in Le Cannet (Alpes-Maritimes).

In this painting, Henri Lebasque depicted his family resting in the shade of tall slender trees. A brightly lit path is leading out of the picture on the right and directs the gaze onto the painting's middle ground with smaller, blurred buildings next to shrubs and trees in pastel shades. As is often the case in his paintings, Lebasque creates a harmonious uniformity between the depiction of his family and the surrounding nature.

Label from Art Salon Abel, Cologne on the reverse.