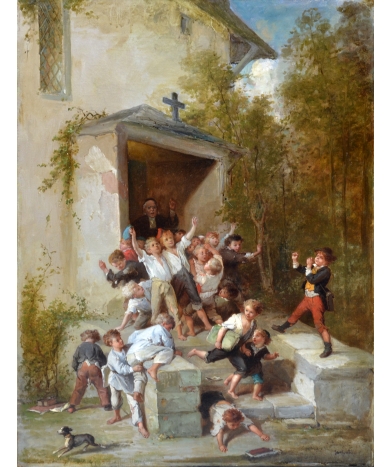 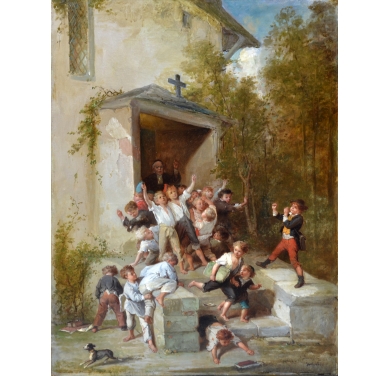 François Lanfant was born in Moselle, eastern France in 1814. He died in Le Havre in 1892. The artist always followed his patronymic Lanfant with the mention "de Metz" to indicate his origin. His master was Ary Scheffer (1795-1858), a great painter of the French Romantic School. The latter very quickly discovered an extraordinary talent for drawing. From 1843 to 1866, Lanfant de Metz exhibited successfully at the Salon des Artistes Français in Paris.

The line of Lanfant de Metz is removed and at the same time precise. The attitudes of the characters he sketches are full of life and truthfulness. His palette is very colourful as he likes to play with children's clothes to make his genre scenes shimmer.

The artist is undoubtedly the French painter of the XIXth century who treated the theme of childhood with the most emotion and delicacy. He portrays the carefree and mischievous nature of children. His genre scenes are sometimes full of humour and always perfectly illustrate the spirit of the 19th century.

This work is exceptional in more than one way.

On the one hand, it is a very large format for this artist whose works are almost always small, 15 by 10 cm on average. On the other hand, the subject matter is exactly what one prefers in Lanfant de Metz: a scene with a multitude of children, gushing out of the church after a catechism lesson that is obviously too long for their taste. Humour, mischievousness and truculence abound: Lanfant de Metz gently mocks the priest who reprimands the children behind the horde of rascals; one urinates on the church, another pretends to play the pipot to show that he doesn't believe a word of what he has just been taught; some fight, others run away, stumble, a dog runs away, two children make a mocking salute towards heaven... You have to look carefully at each character, and realize that no one has the same head, the same attitude, the same clothes. The painter has not abandoned the treatment of the trees and the church, which are part of a particularly studied composition.

This painting is in a beautiful state, on its original canvas; the intact material is well adhered to the support, the bright colours, the fine cracks. The frame in wood and gilded stucco is old, probably original. 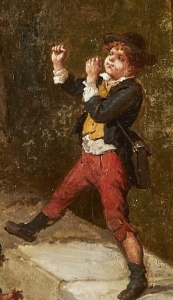 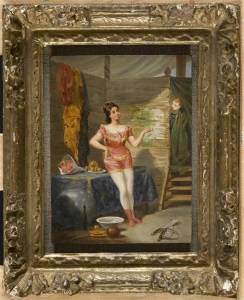