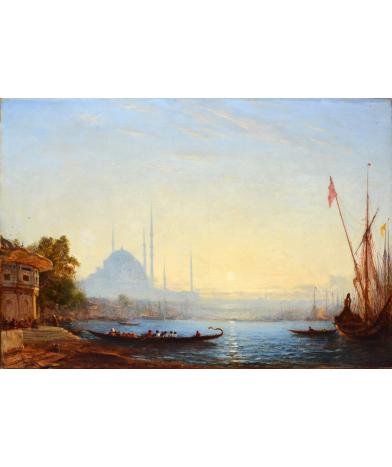 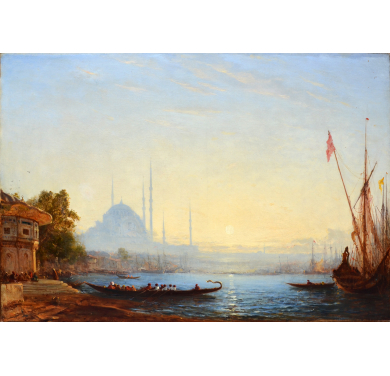 Félix Ziem was born on February 26, 1821, in Beaune, Côte-d’Or (France). He painted several types of subjects including: historical scenes, genre scenes, typical subjects of that time, portraits, animated landscapes, architecture, landscapes, seascapes, water landscapes, and still life. He was also a watercolorist and a drawer. Ziem was a pre-impressionist and orientalist.

His father was Croatian and moved to Côte-d’Or in 1814, while his mother was Burgundian. Ziem studied at the Ecole d’Architecture et des Beaux-Arts of Dijon. He was awarded deuxième prix in dessin et d’architecture in 1839. In 1841, after a long journey on foot, he moved to Nice, where he started to get commissions from the bourgeoisie of the city. Starting in 1842, he traveled to Italy where he visited Rome, and then discovered Venice, which later became his second home. Ziem frequently visited Venice at least several months each year from 1845 to 1892. He worked from his boat which doubled as a studio and his house. After a trip to Greece, Constantinople, and Russia in 1844, he continued his travels to: Belgium and Holland in 1850, England in 1852, and Egypt in 1854. In 1855, he sails down the Danube River on a boat, and in 1856, he visited Turkey and the east part of the Mediterranean Basin. In 1858 he was in Algiers, and in 1860 he was in Holland, etc. He frequently visited Barbizon and moved into a caravan so that he could paint nature better by painting in open-air. He ended up buying a house in Barbizon that belonged to painter Charles Jacque. He was friends with all of the most famous landscape artists of that time. However, he got tired of Barbizon and instead divided up his time between his four houses that he owned in: Venice, Martigues, Nice, and Paris (rue Lepic). During his career, he gained great success from the several thousand paintings he painted. This allowed Ziem to help young artists that were discouraged, as well as founding numerous charities and an asylum for the blind.

Gifted in an activity that is not common, he was able to balance his life of a frequent traveler while still keeping up and participating in a Parisian life. Starting in 1849, he exhibited regularly at the Salon. Around 1865, Durand-Ruel became one of his main art dealers. Ziem received numerous awards and medals: several medals for troisième classe in 1851, première classe in 1852 and 1855, chevalier de la Légion d’honneur in 1857, officier in 1878, and commandeur in 1908. At the time of his death, Ziem bequeathed to the city of Paris a portion of his studio (studies and drawings). It is in his collection that is preserved at the Musée du Petit Palais, that one realizes the technique and talent Ziem had. Just like at Gustave Moreau’s studio, who was another gem of an artist like Ziem, one also realizes the same thing.

Following Guardi and Canaletto, Ziem imposed a new vision of Venice which did not focus essentially on the famous sites of the city of Doges, but in the systematic studies of its changing light according to the hours and the seasons. 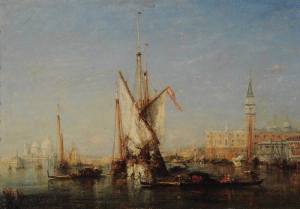