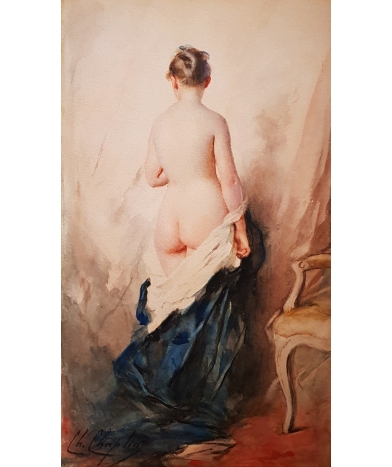 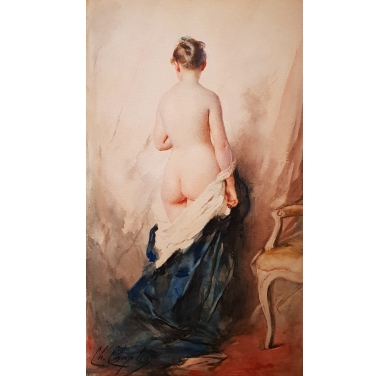 Charles Chaplin is an essential figure of the female portrait in the 19th century. Born in 1825 in Les Andelys (Haute-Normandie), he was a pupil of Martin Drolling at the School of Fine Arts in Paris. Like Franz Xaver Winterhalter, Chaplin is an academic painter, an "official" artist of the Second Empire. Through the softness of the tones, the modelling of faces and hands, Charles Chaplin's work is similar to that of Chardin or Jean-Etienne Liotard. He was appreciated by the Empress Eugénie, who commissioned several paintings from him and asked him to decorate the Salon de l'Hémicycle at the Élysée Palace, the Opéra Garnier and the Tuileries Palace. Considered the Fragonard of the 19th century, he was a great success during his lifetime. His works are now exhibited in the greatest museums in France and abroad.

The grace and delicacy of Charles Chaplin's subjects can be seen in this great watercolour, depicting a naked girl, seen from behind. The artist mastered this difficult technique perfectly. Note the perfect balance of the composition with a vertical line drawn by the girl's body, around which the curves of the clothes and the drapery in the background suggest movement. The choice of colours also contributes to highlighting the subject: the bright colours - the deep blue of the dress, the bright white of the body linen, the red of the floor - are contrasted with the soft pastel tones used by the artist to represent the young girl, her luminous complexion, the delicacy of her neck and the beauty of her shapes.