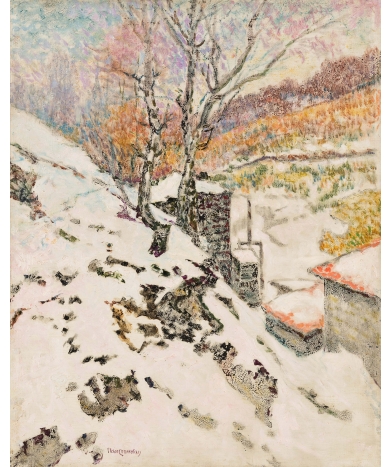 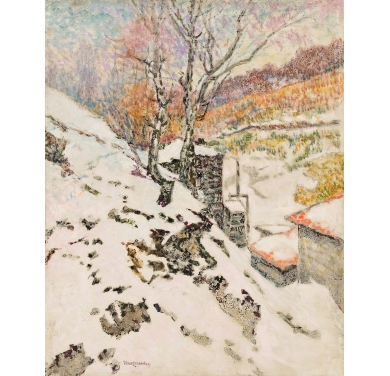 Charreton is a self-taught painter and modernist. His art is unique, unclassifiable. He developed his own techniques and his own supports. In his landscapes, the color dominates the drawing which is quickly sketched with a pencil on the cardboard or the bare canvas. He paints on the ground, without preparation, and practices painting "in reserve", which lets the support appear from which he uses the color. The material, oil paint most often, is applied directly with a knife or a brush, and the chromatic juxtapositions he makes are frank and daring.

The power of Victor Charreton's works is comparable to the Fauvist works produced by Matisse or Derain at the time Victor Charreton moved to Paris. The Auvergne, Brittany, and Provence are the subjects that will remain dear to him throughout his life.

Our painting represents a snow scene, dear to Charreton. It is exceptional first of all by its format, large and vertical.  In the case of Victor Charreton, the size of the painting is an essential criterion because the power of this artist is more strongly manifested in large formats, which partly explains the large price differences that we can note. Moreover, vertical works are rare for Victor Charreton. Here, the artist takes advantage of the vertical format to offer us a bold and modern composition: the diagonal draws a line separating two seasons and two strongly contrasting color palettes. To the left of this diagonal, Victor Charreton depicts a winter landscape, where alternating blacks and whites suggest a heavy snowy coat and dark rocks. To the right of this line, the palette is enriched with light browns, yellows and greens that evoke the awakening of nature with the arrival of spring. The use of a mixture of oil and water, an astonishing technique explored here by the artist, allows him to produce a very particular effect in the representation of snowdrifts, where rocks are outcropping.