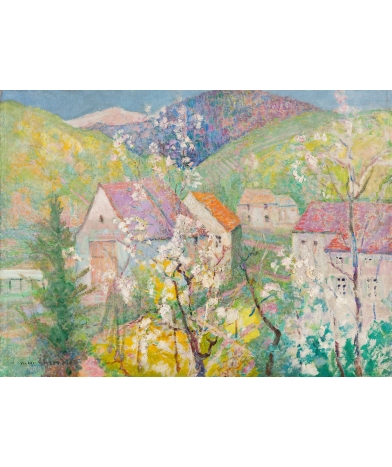 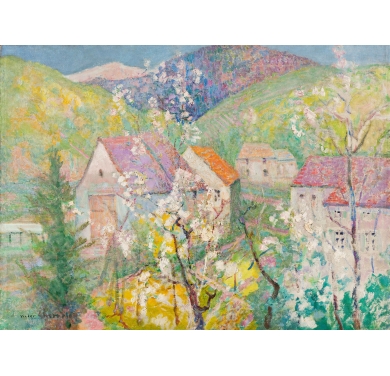 Title in English on the frame SPRING MORNING MUROLS

Charreton is a self-taught painter and modernist. His art is unique, unclassifiable. He developed his own techniques and his own supports. In his landscapes, the color dominates the drawing which is quickly sketched with a pencil on the cardboard or the bare canvas. He paints on the ground, without preparation, and practices painting "in reserve", which lets the support appear from which he uses the color. The material, oil paint most often, is applied directly with a knife or a brush, and the chromatic juxtapositions he makes are frank and daring.

The power of Victor Charreton's works is comparable to the Fauvist works produced by Matisse or Derain at the time Victor Charreton moved to Paris. The Auvergne, Brittany, and Provence are the subjects that will remain dear to him throughout his life.

Our painting is a very beautiful format. For Victor Charreton, this criterion is essential because the power of this artist is rarely expressed in small formats, which explains in part the large price differences that can be noted. This work is quite atypical of Victor Charreton who generally uses strong and contrasting tones. Let's not forget that Victor Charreton was always looking for new techniques, new effects and even new supports. Here, Charreton has mobilized a palette of pastel colors, to suggest the arrival of spring in a magical place imbued with softness. He depicts a group of houses behind trees in bloom. In this magnificent composition, he associates multiple planes: In the front a first line made up of trees covered with flowers which lets see the houses, then hills with soft curves, while in the background one guesses high snowy reliefs.