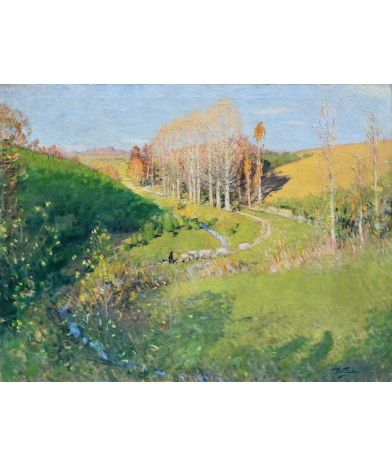 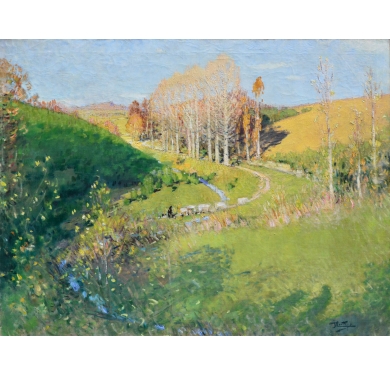 Pierre-Eugène Montézin was born in Paris in 1874. From an early age, he liked to watch his father create; he was famous for his drawings of lace.
At 17 years old, he was hired as an apprentice at a decoration company where he painted panels of flowers and created original ornamental designs.
He is a talented self-taught artist that is not affiliated with any artistic studio. A true nature lover, Montézin developed an exceptional talent for painting landscapes thanks to his keen sense of observation. Montézin was also a big fan of fishing and hunting because his father introduced him to both activities when he was a child. During his father's escapades in the suburbs of Paris, Montézin would accompany him regularly. He liked to discover the landscapes of the countryside and he would walk along the edge of rivers. When Montézin would do this, he would feel like he was one with nature and could appreciate its beauty and diversity.

Pierre-Eugène Montézin was an artist before his time. His modern touch did not correspond with what the academy at the time deemed respectable. At the age of 19 years old, he decides to present some artworks at the Salon des Artistes Français in Paris in which he was denied access to the Salon, and resulted in him being barred for ten years. However, Montézin did not give up. With his strong tenacity and perseverance, the Salon finally opens up its doors to him in 1903.
In 1907, he obtains the 3ème classe medal and in 1910 he is awarded the gold medal of the 2ème classe.

1914, the war breaks out. Montézin enlists himself and he leaves for combat to be on the front lines. At the end of the war, he is decorated with the Médaille Militaire. During combat, he still continues to paint whenever he can. He documents some of his visit in Soissons by painting the ruins of the cathedral, and the ruins of the Abbey of Saint-Jean-des-Vignes.

Starting in 1919, he completely devotes himself to his art and is able to live off of his artworks. In 1920, he receives the Prix Rosa Bonheur.

1922, the Georges Petit Gallery dedicates an entire exhibition to him in Paris. Thanks to the sales of his artworks, he is able to buy some land in Neuilly-sur-Seine, and constructs a house with a big studio in which he lives until his death.
1923, he is named the Chevalier de la Légion d'Honneur.
1925, he buys a country house in Veneux-les-Sablons, which is a small village next to Moret-sur-Loing. From then on, he is back and forth from the city and the countryside.

1932, he obtains the médaille d'honneur at the Salon des Artistes Français. Since 1897, no other landscape painter had received this type of recognition since Harpignies.

1933, he was promoted to the rank of Officier de la Légion d'Honneur, and then is unanimously elected as the Président du Jury des Artistes Français. In the same year, he exhibited at the Galerie Charpentier 237 paintings, which represented five years of work.

1934, he visits Brittany for several months, and then in 1935 he goes to Venice and also travels throughout Italy.
1938, he exhibited at the Galerie Durand-Ruel on the theme of "Life in Paris, life in Nice", where he presents 17 paintings on Paris, and 23 paintings on Nice.

During World War II, he leaves in 1940 for a little bit with his family in Creuse, where he paints a lot.
On July 5, 1941, he is elected the member of the Institut de France at the académie des Beaux-Arts to fill in Edouard Vuillard's place.

1946, Montézin leaves for Brittany. While going to Moëlan-sur-Mer to paint there in open air, he dies at the age of 72 years old with his paintings and box of paints attached to this back. 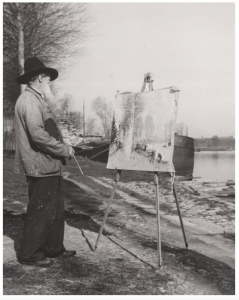 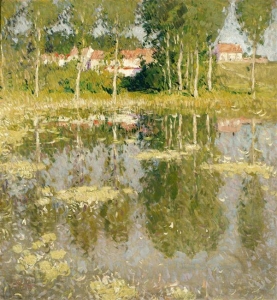