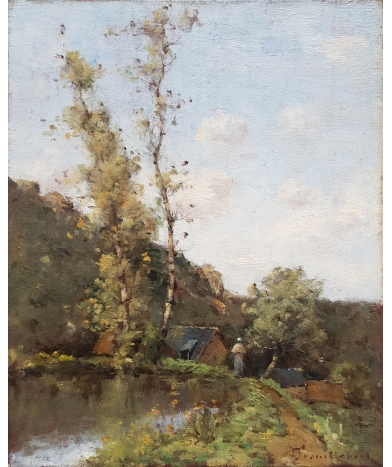 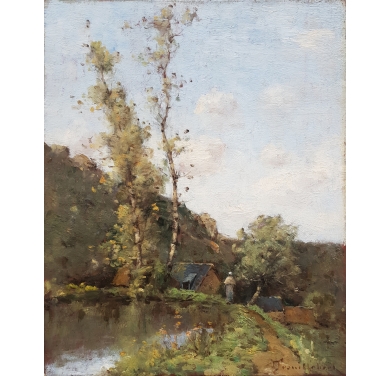 Paul-Désiré Trouillebert was born in 1829 in Paris. He is one of the main landscape painters of the French 19th century. Belonging to the Barbizon school, Trouillebert is the artist closest to Corot in terms of the theme of his paintings, the particular treatment of trees, and the friendly relationship that the two painters maintained throughout their lives. Trouillebert has a predilection for riverside landscapes. The trees are most often birches in the shade of which a character is walking, fishing or gathering wood.

He trained with the renowned portraitist Ernest Hébert (1817-1908) and in the studio of Charles-François Jalabert (1819-1901). Trouillebert was first noticed for his portraits and nudes: the portrait of Mademoiselle A. allowed him to be accepted at the Salon des Artistes Français in 1865, where he exhibited until 1884.

Trouillebert traveled extensively in France, notably in Brittany, the Loire and on the banks of the Seine. He was part of the movement of traditionalist plein air painters, as he stated in an interview with a journalist from L'Echo de Paris in 1890: "I only work from nature, I do not admit the study copied in the studio. "

Our painting is a very luminous work, leaving a large place to the sky and the water. The horizon line opens a diagonal that rises to the tops of the trees. The water plane allows a work on the reflections that Trouillebert mastered perfectly. The female character represented from behind contributes to the lively character of the scene. The sky is beautifully rendered with moving clouds in a luminous blue sky. The palette used by the artist is infinitely rich, whether in the treatment of the sky, water or vegetation. The artist has taken particular care with the effects of contrast between the shadowy areas and those bathed in light. The effects of transparency give the trees a particular vibration thanks to the ochre preparation typical of Trouillebert. Still on its original canvas, this painting is in very good condition. Finally, it is in a beautiful original wood and gilded stucco frame.