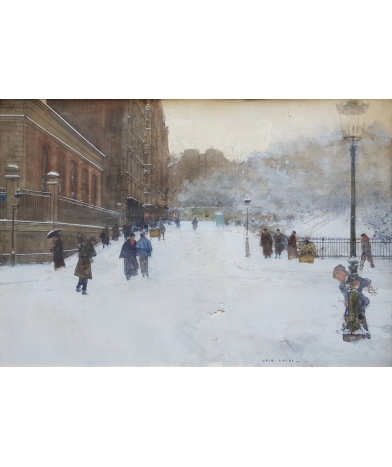 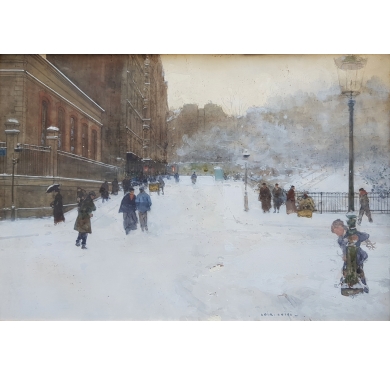 Luigi Loir was born in Austria of French parents. In 1853, he entered the School of Fine Arts in Parma. Ten years later, he arrived in Paris and worked in the studio of the decorative painter Pastelot (1810-1870).

Luigi Loir made his debut on the Parisian art scene with a work entitled "Landscape at Villiers-sur-Seine", painted in 1865. From 1870 onwards, he devoted himself mainly to painting views of Paris which ensured him immense success. For example, a watercolor entitled "Un coin de Fête du Trône" was acquired by the Empress of Russia. Luigi Loir is one of the emblematic painters of Paris at the end of the 19th century and the Belle Epoque. He knew how to capture and interpret the subtleties and atmospheres of the Capital according to each moment of the day and kept a preference for winter scenes where he excelled. Unlike Galien-Laloue and Cortès, Luigi Loir died early in the 20th century and leaves us a much rarer and more truthful production of his time.

In 1889 he was awarded the gold medal at the Exposition Universelle in Paris.

Our gouache represents a view of Paris under the snow, a theme particularly sought after by this artist. One can notice the talent with which Luigi Loir makes this scene very lively, through the numerous characters, all in movement, some going up the street and others advancing towards us. The composition introduces a remarkable effect of perspective, letting us guess the figures in the background. The color palette chosen by the painter allows him to introduce strong contrasts between the characters whose clothes, brown, dark gray or blue gray, stand out vividly against the bright white of the snowy coat that covers the street and the embankments.