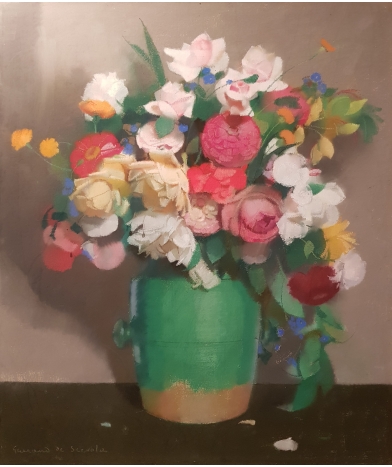 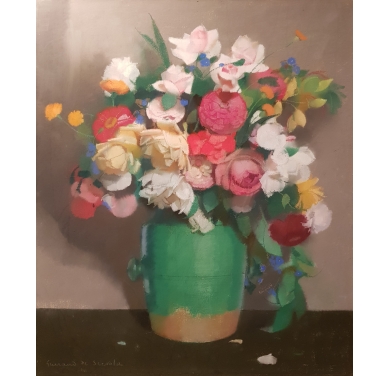 Lucien Victor Guirand de Scévola was born on 14th November 1871 in Sète. As soon as he arrived in Paris he entered the Ecole des Beaux-Arts where he was a pupil of Fernand Cormon (1845-1924). He quickly became one of the most talented portraitists of the Symbolist movement and a figure of Bohemia in the Paris of the 1910s. The painter exhibited at the Salon des Artistes Français and became a member of the Committee of the Société Nationale des Beaux-Arts.

Guirand de Scévola had a brilliant career as a pastellist, a difficult technique which he mastered completely and of which he is with Levy Dhurmer one of the greatest specialists in Art Nouveau. He made portraits of the Duke of Massa, the Duchess of Uzès, the Duchess of Brissac to name but a few. The artist is known for his paintings of flowers and portraits.

Our pastel stands out particularly among Guirand Scévola's bouquets. Exceptionally large, it is also characterised by a profusion of colours. In fact, Guirand Scévola's works are generally done in monochrome. The classical composition is skilfully orchestrated: On the straight and dark entablature, a pot stands out, whose enamel border reinforces the modernity of the composition. Moreover, the profusion of flowers that occupy almost all the space of the canvas does not create a mass impression thanks to the superb work of the shadows that structure the background. Finally, the state of conservation, which is essential for a pastel, is excellent.