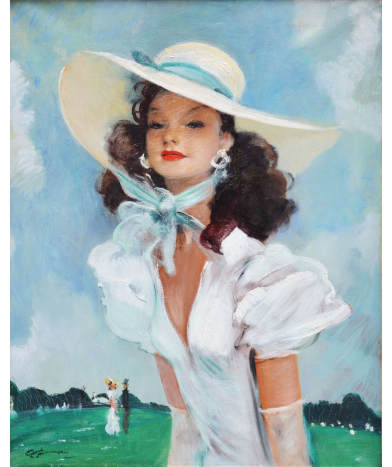 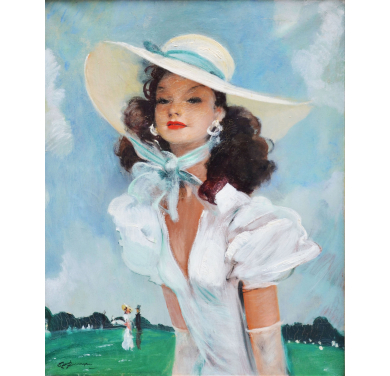 Jean-Gabriel Domergue was born on March 4, 1889 in Bordeaux.

This gifted artist became interested in painting at the age of ten.  With his father, a journalist and art critic, he visited the workshops of the great artists of the time. It is from 1904 years that he really began to paint. At the École des Beaux-Arts, he attended several workshops, including those of G. Lefèvre, Robert-Fleury, Humbert and Flameng.

In 1906, at the age of only seventeen, he took part in the Salon des Artistes Français, where he received an honourable mention: he presents several landscapes and a portrait. A few years later, in 1913, the artist won the Second Grand Prix de Rome.

1920 marked a decisive year for the artist: the Gold Medal was awarded to him at the Salon des Artistes Français. The success was immediate.

He was very quickly solicited by advertising to produce posters and catalogue covers. He also created theatre sets and illustrated several books. He once said, “I am a firecracker in a sepulcher”. This illustrates well the vivacity of spirit of the painter who has developed his sensitivity in many artistic fields.

A prolific artist, he was the painter of the female portrait par excellence, from the 1920s to the 1950s.

At the beginning of the 20th century, Domergue brilliantly succeeded in putting his traditional training at the service of his own style, originality and joie de vivre. He undeniably represents an essential milestone in the evolution of the female portrait.

Domergue is also a worldly painter, his parents were part of the great bourgeoisie of Bordeaux. He frequented the French and British aristocracy and owned a villa in Cannes.

Moreover, as a very influential man, he played a key role in the evolution of the fashion of his time. He designed many models of dresses, hats and accessories for the most famous couturiers, including Paul Poiret and Henry Marque.

In our painting, we find a representation of a young woman dear to the artist: slim, casual, very elegant in her white dress, she looks at the world with a mischievous look, from the top of a long graceful neck. The character stands out against a background of bright green grass that suggests a racetrack on a beautiful spring day. 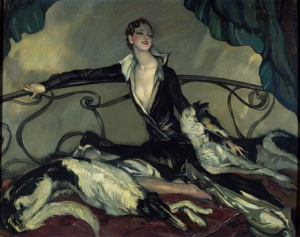