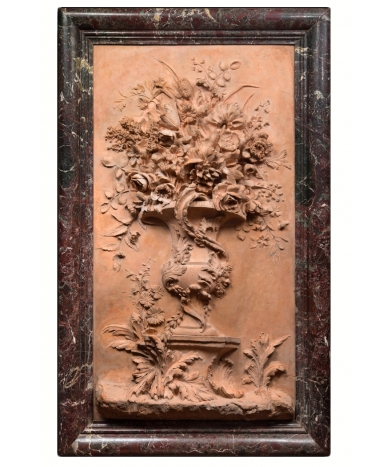 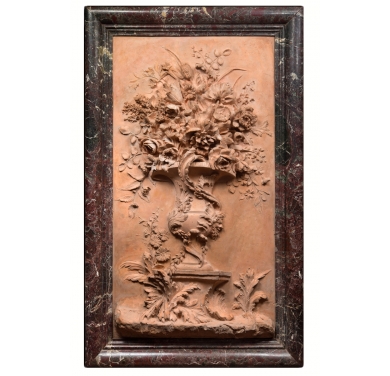 Alexis Peyrotte was born in Mazan, France in 1699, and was the son of the painter Laurent Peyrot.
He is known as one of the best French ornamentalist-painters of the 18th century. He started painting in the Carpentras region where he collaborated with Joseph-Siffred Duplessis on the decor for the pharmacy of l’Hôtel-Dieu.
In 1745, he arrives in Paris where he works with François Boucher and becomes one of the greatest copyists. Peyrotte will dedicate himself to the production of drawing boards in which Chinese flowers are portrayed. His notoriety grows thanks to his diversity and richness of his ornamental models. He enters into service of the Bâtiments du Roi and the Garde-Meuble de la Couronne, while at the same time being a painter and designer for the châteaux de Versailles, Fontainebleau, and Crécy. He also completed some works for the high society families of Fontainebleau.
Peyrotte will do the décor of the apartments of the Dauphin and the Dauphine at Versailles in 1747, the salle du Conseil at the château de Fontainebleau in 1753, the private apartments of the grand château and petit château de Choisy between 1753 and 1766, and the private apartments of Madame de Pompadour in the château de Marly. You can find prints of our high relief plaster at the Bibliothèque des Arts Décoratifs de Paris under the reference ‘‘Collection Maciet, Décoration’’.

The ornamentation of the Medici vase seen on the prints has several similarities to our high relief plaster: the same leaf like object that runs alongside of the vase and acanthus leaves that accentuate the middle and the base of the vase. Also, there is the same spirit and intensity in how the vegetation is depicted. The hooked nose on the satyr’s face is another similarity.

We attribute the sculpting work done on the high relief plaster to Jules-Antoine Rousseau (1710-1782). Jules-Antoine Rousseau was born in 1710 in Versailles. He was sculpteur ornemaniste and then becomes sculpteur ordinaire of the Bâtiments du Roi. Above all, he is known for his wood paneling. He decorates the cabinet du Conseil in 1755, and the king’s baths in 1711 in a neo-classical style at the château de Versailles.
He will also create decorative high relief sculptures.

The two artists Peyrotte and Rousseau will work together on the same projects, most notably at Versailles, Fontainebleau, and Choisy.

Rousseau sculpted ornaments for the salle des Bains of the Dauphin at Versailles, and it was inspired by the drawings of Peyrotte.

Due to their numerous collaborations, we can hypothesize that there could have been a possible collaboration on our high relief plaster.
We see the typical decorative style of Peyrotte and we know that Rousseau did several high relief sculptures.

The richness of the ornamental bouquet of flowers that are in the Medici vase perfectly describe the virtuosity of the sculptor.
A faun’s head which is characteristic of Peyrotte’s designs, is mixed in with rocaille ornamentation which reflects the style that was present during the reign of Louis XV. This style ended when they went back to an antique style and embraced Louis XVI-style ornamentation.
For this exceptional neoclassical high relief plaster that was done around 1780, the sponsors will be able to acquire a magnificent marble, Rosso Levanto, that will come from Italy and is still to this day intact.

The high relief plaster is in an almost perfect state. There are some tiny cracks and nicks but otherwise those are the only imperfections on this very old and rare plaster.
It is possible that the high relief plaster was a model for a sculptural project that was supposed to be in marble or bronze, which unfortunately today has disappeared. 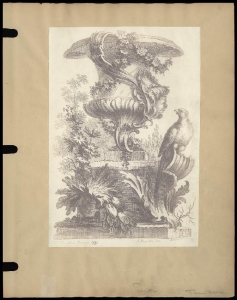 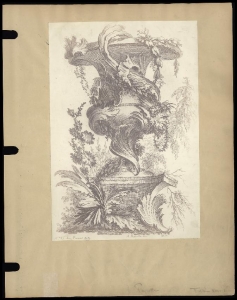