Galerie DelvailleFine Paintings and Furniture
Home > Paintings > Henry Caro-Delvaille (1876-1926) - Portrait Presumed to be of Madame S. and her Daughter
Back
Print
Share
Zoom 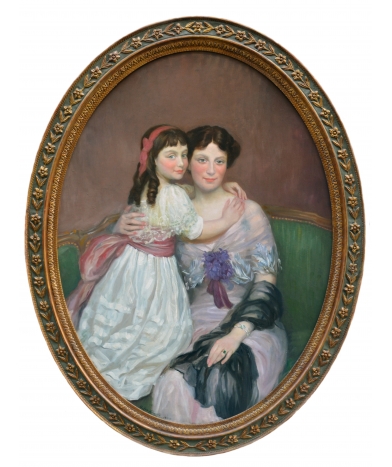 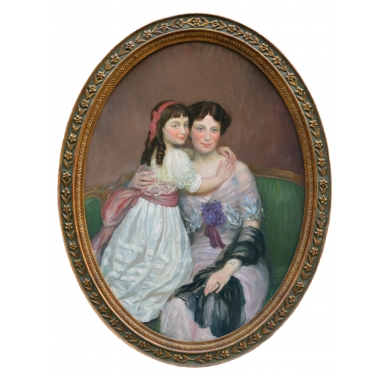 Oil on an oval canvas signed and dated on the bottom

Henry Caro-Delvaille, a French artist with Spanish origins, was one of the best everyday life painters of the beginning of the 20th century. He was also a writer and penned some important works, most notably on Titian and Phidias. His real name was simply Delvaille (“of the valley” in Spanish) and Caro comes from his mother’s first name, Caroline. Olivier Delvaille, the great grand-nephew of the painter, owns the gallery of the same name today.

Since childhood, Henry Caro-Delvaille was curious about art and he liked to look around and draw his surroundings. His mother, who was a writer and poet, was his first leader, advocate, and his greatest master.

After studying from 1895 to 1897 at the Bayonne School of Fine Arts, Henry Caro-Delvaille was a pupil of Léon Bonnat at the Paris School of Fine Arts. He exhibited for the first time at the Salon of the Society of French Artists in Paris in 1899. He won a medal there in 1901 for his painting "The Manicure". A member of the National Society of Fine Arts from 1903, he became its secretary in 1904. In 1905, he won the grand medal at the Munich International Exhibition. The same year, his friend Edmond Rostand entrusted him with the decoration of his villa in Cambo. He became known as a portraitist and enjoyed numerous commissions. He was knighted in the Legion d’honneur in 1910. His painting can be compared tothat of Carolus Duran (1837-1917), a famous worldly painter of the Belle Epoque in Paris.

Henri Caro-Delvaille emigrated to the United States in 1913 and settled permanently in New York, evolving towards an Art Deco style. He was thus one of the central figures of artistic, literary and musical circles on both sides of the Atlantic, from Paris to New York. Much of his work is now found across the Atlantic.

Our painting is listed in the data base of the French National Museums Association. It depicts the portrait of Madame S. (Madame Signorelli), and her daughter and was exhibited in 1910 at the Salon of the National Society of Fine Arts. The artist's talent is manifested in the grace of the attitudes of the two characters, the purity of their faces, the silky rendering of the fabrics and the transparency effects of the veils