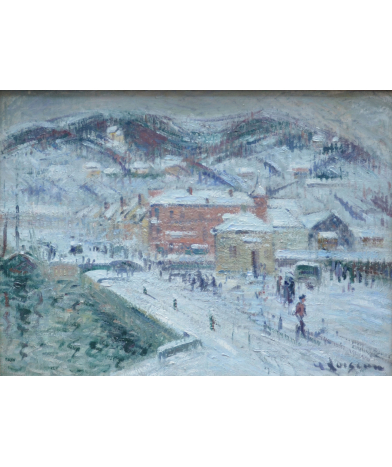 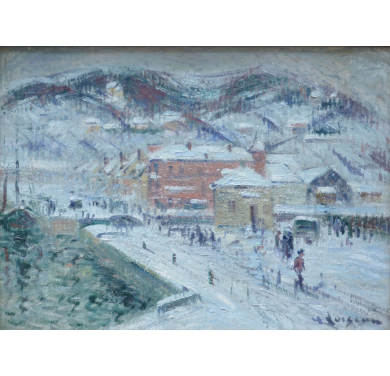 Port de Fécamp in the Snow

Replicated in the catalogue for the exhibition Gustave Loiseau – Paysages d’Île-de-France et de Normandie at the Camille Pissarro Museum in 2018 on page 113
French School, oil on canvas signed bottom right

Gustave Loiseau was born in 1865 in Paris.
He was a landscape, seascape, and urban landscape painter.
Loiseau was also a post-impressionist.
After his studies at the École des Arts Décoratifs of Paris in 1890, he worked at Pont-Aven (Brittany, France) beside Gauguin. He also knew Maufra and Emile Bernard.
In 1893, he will exhibit in Paris at the Salon des Indépendants, and in 1895 he will exhibit at the Salon de la Société Nationale des Beaux-Arts.

From 1890 to 1896, Loiseau will also take part in exhibitions of post-impressionist painters.
After being influenced by the Cloisonnism of Gauguin, he starts to focus more on Post-Impressionism in 1895 which he was influenced by Pissarro, and then by the Divisionism of Seurat.

The only thing he keeps from the Cloisonnism technique is a geometric-like construction to his paintings. He brought a softer brushstroke to Post-Impressionism as well as the use of latticework which is what made him unique.

A frequent traveler, his paintings show a lot of diversity. However, he does like to stick to depicting scenes of Paris, the banks of the Seine, the cliff at Dieppe, and Dordogne Valley. 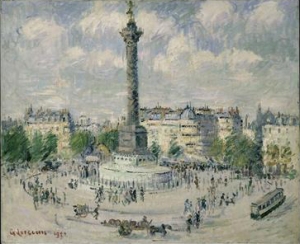