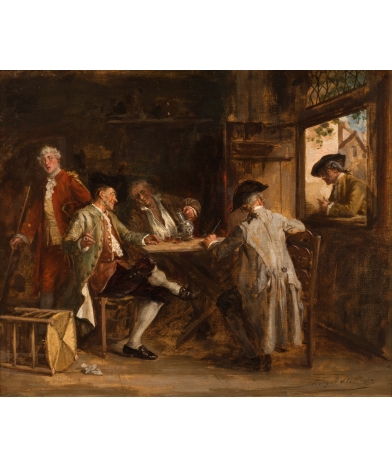 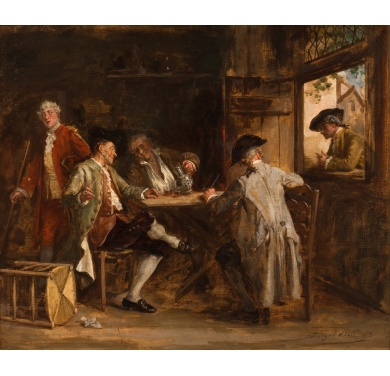 Georges Brillouin is a genre painter, excellent draftsman. At the School of Fine Arts in Paris, he was a student of the famous academic painters, Drolling and Cabat. Parallel to his classes, Brillouin immersed himself in the Louvre museum of the greatest artists, Ingres, Rubens, and Van Dyck.

Without leaving Cabat's studio, Brillouin freed himself from academic teaching. After his meeting in 1841 with Théodore Frère, he took a taste for a more lively and natural painting. He admires Eugène Delacroix. Without succumbing to the temptation of orientalism, Brillouin will adopt its warm tones. In the workshop of Louis Cabat, he befriends the great masters of naturalism, Jules Dupré, Théodore Rousseau, Camille Flers, Jules Laurens...

Brillouin presented many works at the salon from 1843, and obtained a medal in 1865. From 1847 to 1850, Brillouin made black pencil drawings to illustrate the works of Victor Hugo: Don Rodrigue de Lara, Olympio, The Pas d'Armes of King John, the hunt for Burgrave. His works were greatly appreciated during his lifetime, and he lived very well from his painting. We can notice that many of his works kept in museums are in beautiful frames, a sign of the success of an artist at that time.

Georges Brillouin was a painter who loved life. Our painting illustrates his taste for genre scenes where each character is painted with his character, mood and personality. The attitudes render perfectly the moment of a moving scene. Very well composed, the scene depicts two serious discussions where one perceives in the protagonists the secret, the concentration and the respect. The character at the back is capital in the arrangement of the scene; dressed in red and gold, this dreamy looking character breaks with the horizontality and seriousness of the scene, and brings a second colorful vanishing point.
This painting is in a very good state of conservation, on its original canvas. It is in its magnificent original frame with canals, gilded with leaf and perfectly restored.