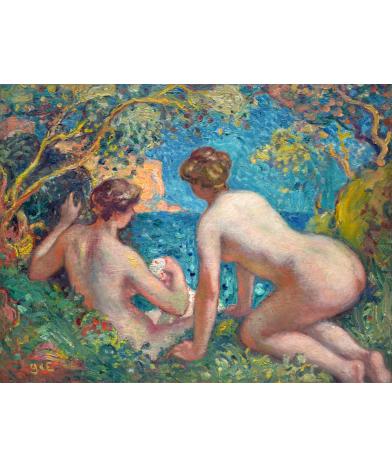 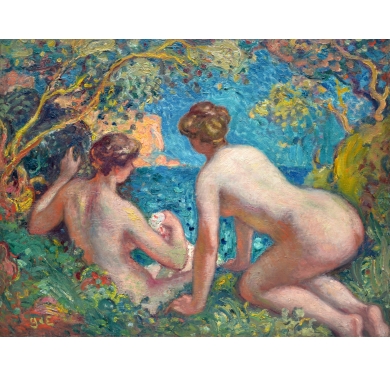 Georges d'Espagnat was born on August 14, 1870 in Melun, Seine and Marne.
Starting right from the beginning of his career, Georges d'Espagnat had the desire to assert his originality artistically.
He began his training in Paris, but quickly preferred to study and work alone with subjects of his choice: primarily still life, nudes, and genre paintings. He went to the Louvre every day to study the proportions of the body in the antique section. D'Espagnat greatly admired painters like Poussin, Rembrandt, Rubens, and Delacroix. He also took some classes on his free time at the académies libres de Montparnasse.

1893: exhibitions at the Salon des Artistes Indépendants and the Salon de la Société Nationale des Beaux-Arts
1898 to 1911: held several exhibitions at the Galerie Durand-Ruel (in Paris and New York)
1899 to 1901: he exhibits at the Salon de la Libre Esthétique de Bruxelles
1900: meets Maurice Denis, Pierre Bonnard, and Edouard Vuillard
His collaboration with Maurice Denis is the reason for the renewal of sacred art in France.
1903 to 1949: exhibition at the Salon d'Automne where he is one of the main founders
1904: exhibition at the Salon of the Sécession in Berlin
1918 and 1926: he exhibits at the Galerie Bernheim in Paris
1934: he is appointed as professor at the École des Beaux-Arts de Paris
1951: posthumous exhibition at the Salon d'Automne de Paris
D'Espagnat also belonged to the group of illustrators who made the Courrier Français successful.
He is an artist who had a tendency of using both impressionist and fauvist techniques. D'Espagnat was able to stand out from both movements by creating works with a free spirit governed by an explosion of colors.

Our painting depicts two naked women that are bathing, and who are being viewed from the back while comfortably sitting in the grass. They have a lascivious attitude while admiring the ocean, and are in the shade of the lush vegetation during a beautiful summer day. The expressive brushstrokes and colors make us believe that the painting was painted before 1910, during his Fauvism period. His style is simple and he has a wispy touch that invites the viewer of the painting to experience the intimacy of the two young women. D'Espagnat also wants the viewer to admire the beauty of the countryside which is being offered in his composition. The gracefulness of the female body is accentuated in bright lighting which shows off all of its nuances. His pictorial language is similar to that of Vuillard and Bonnard.

Exhibition:
Stuttgart, Kunsthaus Bülher, German and French paintings from the beginning of the 20th century, June-August 1997 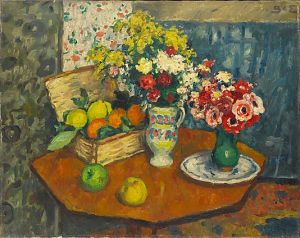