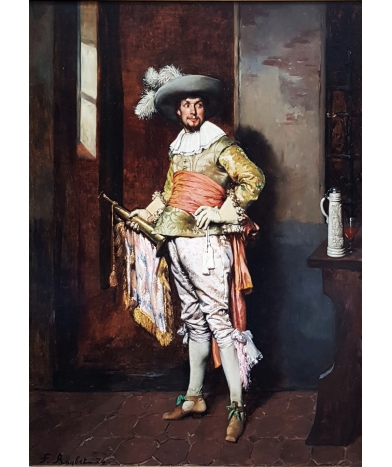 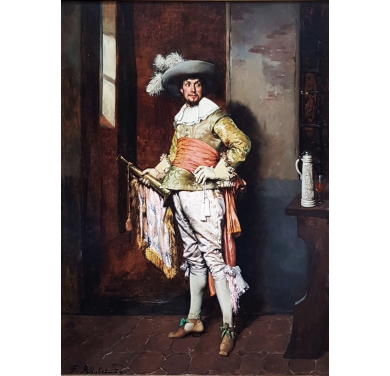 Ferdinand Roybet is a genre painter, portraitist and engraver, born on 12th April 1840 in Uzès (Gard). He began by studying engraving in Lyon, and then came to Paris in 1864 where he was a pupil of Vibert. In 1866, he sent to the Salon a painting entitled "Un fou sous Henri III" which was acquired by Princess Mathilde and ensured his reputation and definitively decided his genre. He was awarded several medals of Honor at the Universal Exhibitions of Antwerp (1894), Berlin and Vienna. In 1871 he visited the museums of Holland and painted numerous copies of Rembrandt and Franz Hals. A number of portraits of him are known, including those of Mrs. Gibson, Georges de Dramard and Antoine Guillemet.

At the end of the 19th century, Roybet was one of the central figures in the art of portraiture and interior scenes. The artist virtuously satisfied the fantasies of his rich patrons, no doubt tired of the traditional bourgeois portraits of the time. From Franz Hals, Roybet took the power of form, and from Rembrandt, the fervor of his quest for the model's soul. The artist paints with a quick and precise touch these figures dressed in the fashion of the 17th century.

Our painting, a gentleman standing proudly with one hand on his hip, is an admirably successful work by Roybet whose abundant production is sometimes less accomplished. The artist succeeds in depicting the figure with remarkable realism. Note the perfect balance of the composition, the care taken with the smallest details, the richness of the costume, the grace of the posture, the expressive face of the figure, the intensity of his gaze. With talent, the artist thus offers us a particularly lively portrait.