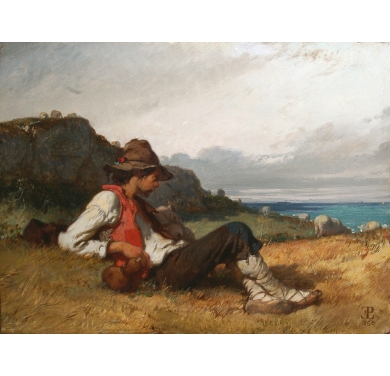 A Shepherd and His Dog Guarding the Herd, 1865

He was the student of Hersent and Xavier Le Prince. He exhibited at the Salon starting from 1831 to until his death. He presents a large number of seascapes that bring him great success. Le Poittevin is awarded several medals in 1831, 1836, 1848, and 1855.
He is also a member of the Académies in Antwerp and in Berlin.
Le Poittevin exhibited many times in Germany, and especially in Berlin and Dresden.

With his good friend, painter Eugène Isabey, he discovers Étretat in Normandy. For Le Poittevin it was love at first sight and he decided to build a chalet-studio which he names, La Chaufferette.

In 1869, Le Poittevin receives his artist friend Gustave Courbet in his studio. 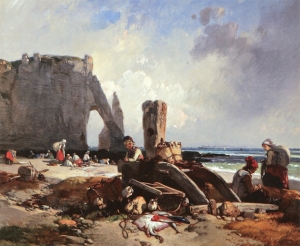