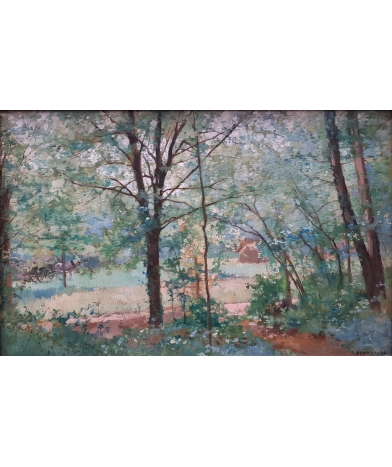 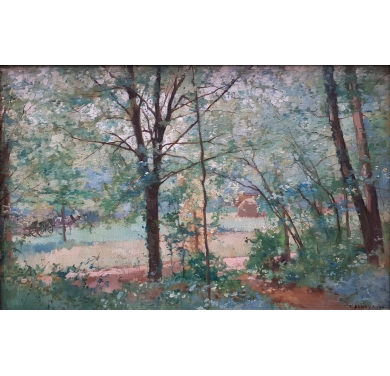 At the Ecole des Beaux-Arts de Paris, Emmanuel Damoye was taught by the greatest painters of the time, Corot, Daubigny and Bonnat. From his classical training Damoye kept a remarkable drawing technique. He will not escape the call of Impressionism even if he keeps his distance from this dissident movement to exhibit at official exhibitions where his works were rewarded on many occasions. In 1889, he was awarded a gold medal at the Universal Exhibition, and then received the Legion of Honor in 1893.

In 1890, he founded the Société Nationale des Beaux-Arts with other artists and became a member of the committee of this important artistic group.

Through its rivers, marshes and forests, the whole atmosphere of the Barbizon painters can be found. His canvases, respectful of the canons of composition, often taking up the same theme, clearly show the sincerity of his emotion in front of nature. He uses a particularly successful lighting.

His works can be found in many museums including Arras, Antwerp, Dunkirk, Perigueux, and Paris.

Our painting is a rare and particularly successful work by Emmanuel Damoye. Indeed, this artist left us many views of plains, a little empty, with only heather vegetation that he loved to paint. Here, the composition is an abundance of trees and foliage through which the light pierces and reveals a radiant summer sky. Behind the undergrowth where the painter placed himself, a sunny plain is animated by a cart and a haystack. Everywhere, the touch gives the viewer the impression of light catching the leaves and all this nature. This work was created in 1894, a beautiful period for the artist when he was still very young, when his light touch and his excavated compositions are as rare as they are remarkable.