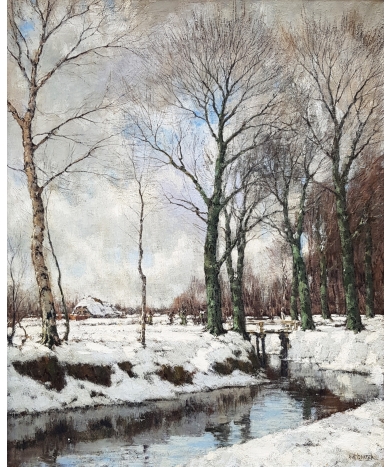 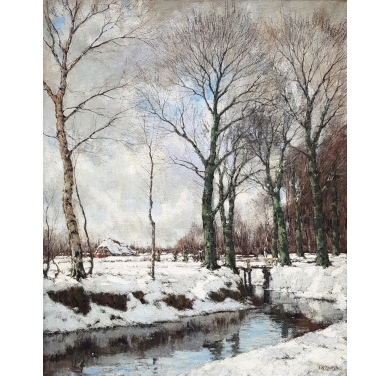 He studied at the National Academy of Amsterdam and he was a pupil of August Allebé and Pierre Cuypers at the Rijksnormaalschool voor Teekenonderwijzers in Amsterdam in 1888, and the Rijksakademie van beeldende kunsten there in (1889-1891).

He was a member and then the president of the artists' association Arti et Amicitiae, a Dutch artist's society founded in 1839, and located on the Rokin in Amsterdam. The Society (also called Arti for short) has played a key role in the Netherlands art scene and in particular in the Amsterdam art schools. It was and is to this day a hub for artists and art lovers in the city of Amsterdam.

Arnold Marc Gorter is a painter known for his landscapes. He won a medal at the Munich Salon in 1905 and a gold medal at the Paris Salon in 1910. He was the favourite artist of Queen Wilhelmina of the Netherlands, whom he accompanied in 1922 on a trip to Norway as a painting teacher.

With a rather large vertical format, our painting is one of the artist's rarest and most remarkable works. The composition is particularly successful. It gives a large space to the sky and the water, while allowing the artist to stage his favourite subject, a winter landscape with large trees with their bare branches pointing towards the sky. The latter is beautifully rendered with moving clouds and blue holes. Also noteworthy is the remarkable luminosity that emanates from the earth covered with immaculate snow.

Still on its original canvas, the painting is in a good state of preservation, and is presented in a beautiful gilded wood and stucco frame, most certainly original.