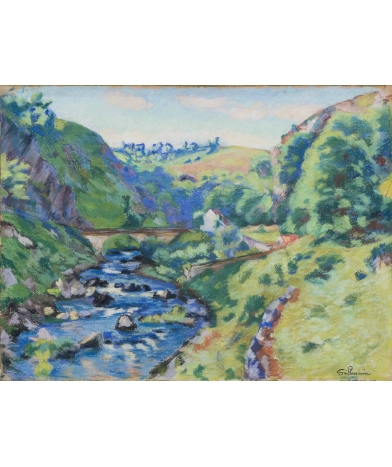 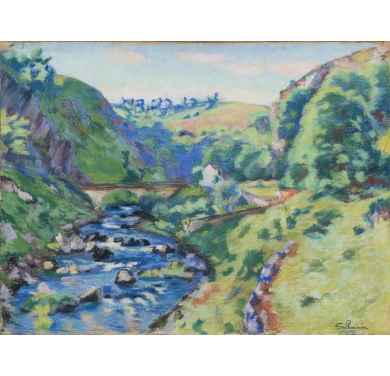 This work will be included in the 2nd volume of the catalogue raisonné on Armand Guillaumin in preparation. Certificate of the Guillaumin committee, D. Fabiani and Ph. Cazeau, dated March 6, 1998.

Armand Guillaumin is a self-taught artist. An early impressionist, he leaves a considerable body of work, including hundreds of paintings and pastels preserved in all the major museums throughout the world. The Musée d'Orsay alone holds several dozen works by this artist.

Born in Paris in 1841, he grew up in the Creuse region, which will remain his favourite subject for the artist. From his teenage years, he developed a passion for drawing, which he practised unceasingly. At the age of sixteen, he is sent to Paris to learn the trade of merchant, but he is already devoured by his passion. He visits museums, watches artists painting in Montmartre, walks in the gardens and makes sketches.

From 1861 onwards, Guillaumin attended classes at the Swiss Academy, which was opposed to official painting. He befriends Cézanne and Pissarro, then Manet, Degas, Bazille, Renoir and Sisley. Guillaumin exhibits at the Salon des Refusés in 1863 with Manet, Cézanne, Boudin, Monet, Whistler and Pissarro. By participating in six of the eight exhibitions from 1874 to 1886, he was part of the Impressionist adventure: the Impressionists tried to translate the ephemeral by focusing on the search for sensation; the literary aspect of the subject took a back seat. In the lineage of the Barbizon painters, they paint in the open air, directly on the motif, i.e. without any preliminary sketches. Their favourite themes are waterside activities, urban life and leisure. The pictorial treatment is done in small, quick and light touches.
Throughout his life, Guillaumin remained faithful to Impressionism. He travelled a lot in Normandy, Brittany, the Dauphiné, on the Mediterranean coast, but more particularly in Crozant (Massif Central) where he says: "That there exists in the world a country as beautiful as Crozant, it is possible but a more beautiful one, I cannot believe it". Like many of his impressionist colleagues, he was in perpetual search of light in order to retranscribe its effects on nature.

Our pastel represents the Crozant valley in summer. The river structures the composition by tracing the perspective between the mountains. Of an intense blue, the water contrasts with the soft green of the vegetation. The dating of 1905 by the Guillaumin committee is a major asset. Organised around Henri Matisse and André Derain from the summer of 1905, Fauvism developed until 1910. Based on the use of pure flat tints, this current has lastingly transformed Art and its pictorial certainties. Even if Guillaumin is not strictly speaking classified as a Fauvist, our pastel shows how much the artist was a precursor.